It's been a busy few months with work and even gaming, where attention has been on my WW2 Russkis.  But we have a Napoleonics game with Black Powder coming up next month, so the painting bug is back again.  And I've made a start on the Freikorps Pfaffenhofen at last!

I was hoping to have it ready by December 19th (the next games day at the club), but there is no realistic chance of this happening, as next week I'll be off for five days on a business trip, to be followed by another, shorter one less than three days after I get back.  Then there will be the reams of paperwork that will need doing as a result- all with laughingly unrealistic deadlines of their own, I might add.

In any case, I still have some French artillery and some terrain I need to work on first.  Still, I'll do what I can, and with two weeks holiday on the horizon (at last!), I've no doubt I can get them finished by the new year.
For the Freikorps, I ordered the Lutzow's Freikorps figures from Calpe Miniatures.  This was the first time I have worked on Calpe miniatures,  and I have to say that these are very nice figures.  Almost no flash to speak of.  I spent an afternoon removing the flash while listening to that pod-cast on the Russian army in 1812-13 presented by Dominic Lieven.  This was very interesting, and mitigated to some degree the tedium of cleaning figures.

Once that was done, I then briefly sprayed them with surface primer to give a key to black undercoat as you can see here. 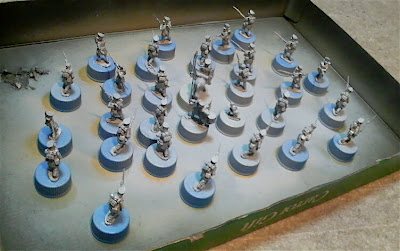 Then I brush-painted on the black using Ceramcoat craft paint.

This took a while, but I've become suspicious of sprayed undercoats recently after a number of bad experiences.  I like the control of brush painting, and I don't have to worry about weather and timing.
Next up will be to drybrush the shako covers and add the basecoat to the faces and hands.
Posted by Robert at 12:40 PM 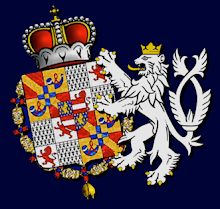